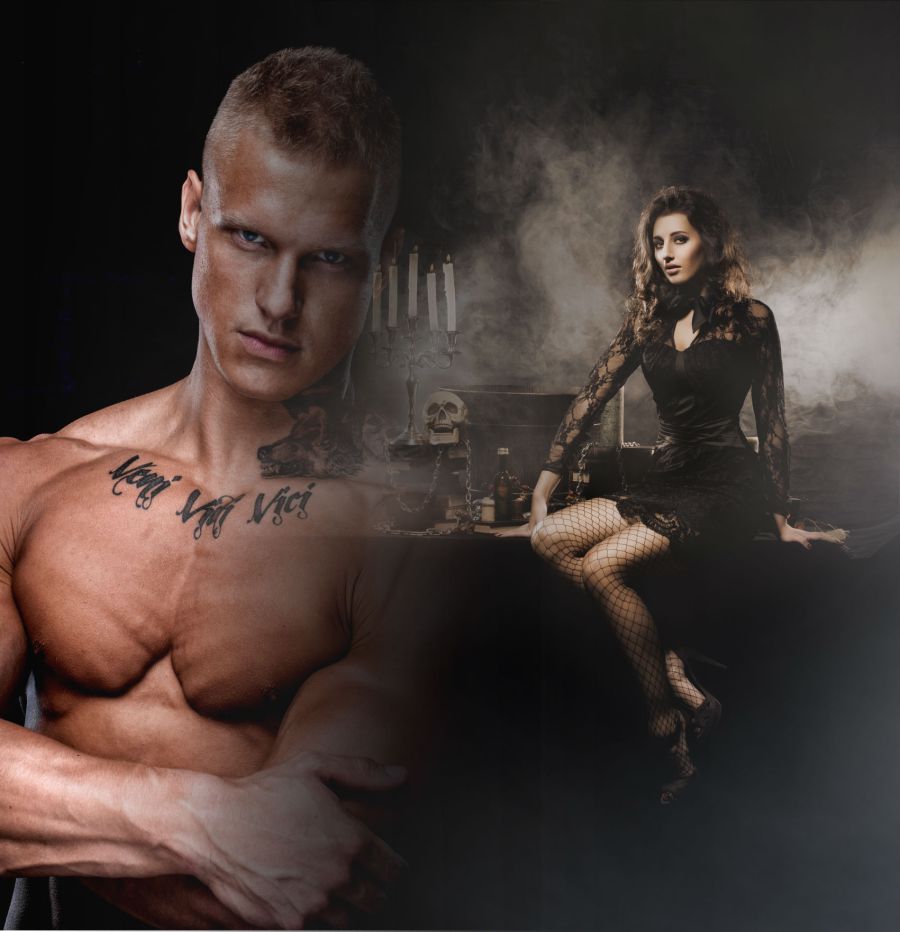 This is how the story of my Tristan and Isolde started, peeps! Meet the invincible fighter Tristan. What’s his secret?

Dr. Schweizer sits back in the comfort of his loge, sipping his brandy. Down in the ruins of the ancient arena, two men hang sweaty and heaving on each other. His bets are on the big one with tattoos and savage hair, but surprise! The blond guy suddenly steps back, and he crashes a fist in his opponent’s face. The savage hits the ground, clouds of sand rising into the heated air. The audience surges, and Dr. Schweizer sits up straight.

He snatches the magnifying glasses from his lady friend’s hand, and holds them up to enhance his own vision.

The young blond stands over his sprawled opponent, muscle and old scars glistening in the limelight. His eyes are arctic blue. Chills crawl down Dr. Schweizer’s back. If this boy is Stahl Biotech’s Frankenstein, he’s definitely not what the doctor expected. He’s not some monster put together of dead body parts, but rather a beast created in Hitler’s very labs decades ago. Speaking of . . .

Dr. Schweizer drops back into his cushioned seat from where he has a high view over this secret underground arena. “Can’t be him. He’s too young.”

His lady friend takes the glasses from his hand and places them before her eyes with a delicate move. “Beauty is only skin deep, Viktor. So is youth.”

Lady Marie France Cassel lowers the glasses just under her eyes, long dark lashes obscuring her gaze. “I’d call him fascinating.” She pauses, looking hard at the young blond. “His face. It’s the face of a warlord, not that of a slave.”

“Pure Aryan features. The Führer would’ve sacrificed an arm and a leg for a specimen like this.”

Lady Marie France holds the glasses before her eyes again. Dr. Schweizer looks from her to the young blond brute, whose foot is on his opponent’s neck. The crowd demands an execution. The blonde’s thigh flexes, the savage’s neck snaps, and the crowd booms.

Energy surges through Dr. Schweizer’s veins as well, compelling him to stand. His eyes rest on the blond man’s face—sculpted as if in ice, no trace of emotion. He stands by the dead body, naked to his waist, those arms capable of so much damage hanging motionless by his sides.

“If it is him,” Dr. Schweizer mutters, “he’ll wipe us out. None of our fighters is a match for The Ripper, they can’t protect us.”

Lady Marie France tilts her head to the side, inspecting the fighter with narrow eyes. “Now that we know his true identity, we’ll observe him from the shadow. We’ll stalk him. Find his soft spot. Then use it against him.”

Dr. Schweizer snorts. “The Ripper doesn’t have any soft spots. He doesn’t feel. That mechanism shuts itself down completely in men like him, and all that remains is anger. It’s the only way they can live thug life at this level.”

“If he doesn’t have any weaknesses, as you say.” Her eyes move slowly from the fighter to Dr. Schweizer. His heart skips a beat at the touch of her deep brown gaze. “We’ll make him one.”

Dr. Schweizer stops breathing. “What do you have in mind?”

Lady Marie France’s gaze deepens, and the doctor understands. He looks to the amulet hanging from a golden chain around the woman’s neck, now resting just above the swell of her breasts.

“You think your potions can take down The Ripper?” He can’t keep back a scoff. “With all due respect, Lady Cassel, I know you’re an imperial chemist and all. But maybe The Ripper is a size too big for your skills?”

Lady Marie France’s long-nailed fingers curl around the amulet that resembles a silver cross with a white gem at its core, right where the lines meet. Dr. Schweizer knows—once the subject’s blood is in it and mixes with the essence, the gem turns red, like a ruby. Or like scotch.

Enjoyed this? Plenty more where it came from : ) PLEASE NOTE THAT THESE CHAPTERS HAVE BEEN WRITTEN BEFORE I’VE DECIDED ON THE NEW TITLE, The Devil’s Elixir. Therefore, you’ll find them under the title Tristan and Isolde Reloaded.