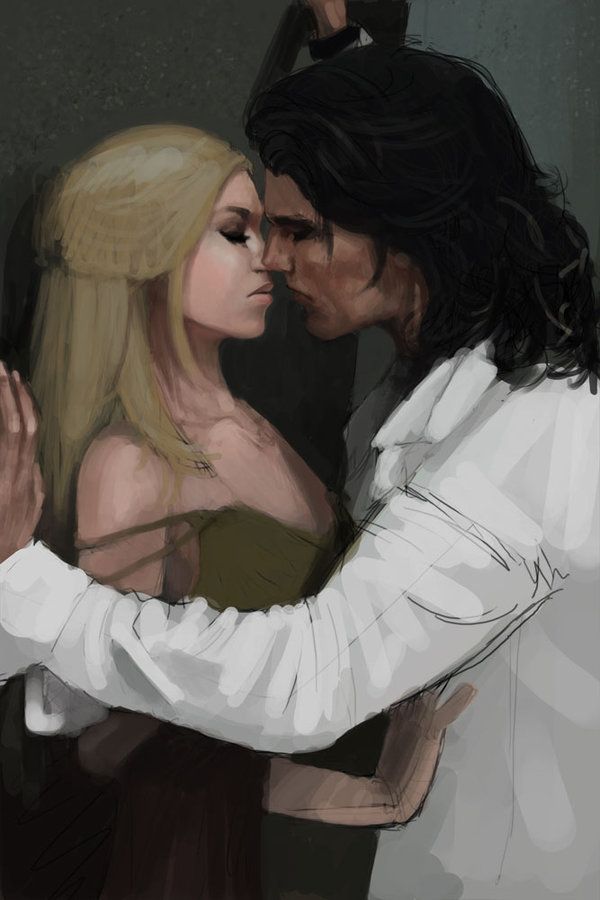 Daylight makes it through my eyelids, stubborn and stingy. I shield my eyes and squint around to realize I’m tucked under the long coat, alone on the couch. I sit up with a jolt, and my eyes find the Marquis.

He’s sitting at his desk, wearing a dark suit that compliments his athletic shoulders and arms. He’s as cool and composed as ever, but the moment he looks from his papers to me his gaze changes from that of a cold prince to that of a man who knows, who understands and who cares – the gaze of Kieran Slate. He smiles and stands.

I watch as he approaches, the events from last night replaying in my head like a movie on fast-forward until he squats by the couch, taking my hand and kissing it.

“I would’ve brought you to a cosier room, but I thought you’d freak out if you woke in a place where you didn’t feel safe.”

“Last night I told you this study was the only place serpents couldn’t breach,” he reminds me.

“I had clothes and water brought here. I knew you’d be scared if you woke up alone, so I didn’t leave you for a second.”

Once again affection overwhelms me. “Your wounds?”

He unbuttons his jacket and his shirt, revealing his marble pectoral as the fabric falls off his shoulder. Only a thin scar even whiter than his skin reminds me of the gaping wound from last night. My eyes widen.

“What you did for me last night, Saphira,” Kieran says while his hand brushes through my hair as far as the tangles permit it, “it started mending other wounds too. Wounds that don’t show on my body.”

I search his beautiful face and I’d do it forever, but a knock on the door distracts both our attention. Kieran gives me another glance, assessing me up and down – probably to make sure I’m decent – before he permits the visitor to enter.

The double doors open to reveal the head of security Zed with his hands on the knobs. Our eyes meet. His features are as stony and controlled as ever, his ice-blue eyes as focused, but the scars on his face in the shape of scratches bring back a flash of memory – Kieran’s claws slashing the first attacker.

“It was you,” I whisper, remembering the way he writhed and hissed like a lunatic snake – which is exactly what he was, according to Kieran’s explanations. A pang of fear goes through me, but Kieran’s protective arm winding around my shoulder brings back a sense of safety.

“Zed only attacked you because of the moon’s influence, Saphira,” Kieran says. “His animal instincts controlled him, but not anymore.”

“You can rely on me to protect you as I did before, Milady,” Zed adds, bending his head, but his body keeps stiff and straight.

I look him up and down, fascinated by the difference between the animal and the man. “Milady” doesn’t go unnoticed either.

“I’m sorry for the misunderstanding between you and Kieran,” I say. “It was all my fault.”

“No apologies needed. You wouldn’t apologize to a wolf for having provoked him with your presence in the woods either. Plus that we regenerate fast, no permanent harm was done.”

“What do you have?” Kieran cuts in.

“Vivien Grant,” Zed replies, raising his head and squaring his shoulders like a soldier at his superior’s command. “We trailed her. She sought haven with relatives in the southern forests.”

“Vivien lives?” I yelp and spring up to my feet.

“She does,” Zed says. “But she’s so traumatized she can’t speak.”

“What?” I start walking to Zed, as if that can make things clearer. The man doesn’t move an inch, keeping as stiff and cold as a robot. “What she went through left her with a trauma. She’s shaky and mute and seemingly not in her own body.”

“That’s impossible. We let her stay with her relatives and left guards behind, since bringing her here would put her life in danger. Her presence would attract Basarab and help our cause indeed, but I doubt you want your friend used as bait.”

Kieran clasps my shoulders and turns me to face him.

“Listen, Saphira. The men made sure Vivien is safe, but for the moment this is all we can do for her.” He turns to Zed. “We’ll discuss the details later. Now escort Saphira to the chamber – my chamber. It’s more comfortable.” He addresses me again. “I’d accompany you myself, but I have to prepare the plan.”

“Plan?” I frown in confusion.

“Zed will explain.” Kieran squares his shoulders, his hands dropping off me.

The head of security steps aside and motions me to walk before him. “I’ll tell you all about it, Milady. Saphira.”

Kieran is already on his way back to his desk. I stand in place and watch him until he faces me again.

“Thank you. Thank you so much,” I whisper. Our eyes lock, and emotion flows between us. I want to run into his arms and kiss him, but I remember my dirty skin, my crazy hair and the stained ripped dress I’m wearing. And the plan. I turn and let Zed close the doors behind me.

Two other men wait outside the study and lead Zed and me up the grand stairs, past the huge pointed arch on the first landing to what turns out to be Kieran’s majestic bedroom on the first floor. A huge arched window reveals a view of the rocky fields where serpents crawled and squirmed last night in the terrible fight that I survived only thanks to Kieran. There’s a king size bed, a fireplace and all the decorum of a palace, but it barely looks inhabited.

“He’s rarely here,” Zed says, as if reading my mind. The door is still open behind him. He avoids being alone with me, and I can understand that. I can only hope he’ll talk freely nonetheless.

“He mostly spends his nights as a serpent. But things might change now, since you and him . . .” He clears his throat and changes the subject. “Please, get ready. You and Kieran are going to the lunatic asylum today to talk to your friend’s mother.”

I’m baffled. “Why the asylum?”

“That’s where Mrs Grant has been since the events with her daughter and the burning of her house.”

The news strikes me like a punch. “Excuse me?”

“She was hysterical, impossible to control, they said.”

“The police, led by your friend Jeremy Simmons. They had to restrain her and turn her in for special care at the asylum.”

Enjoyed this? Please let me know your thoughts in a comment, I’m always ecstatic to read from you. Stay tuned for a new episode on Friday and check out the prequel, Saphira, in the Christmas Story Book for Adults, available here and, if you’re in for a whole novel in the same genre, feel free to help yourself to The Executioner (Part I) : ) Enjoy!